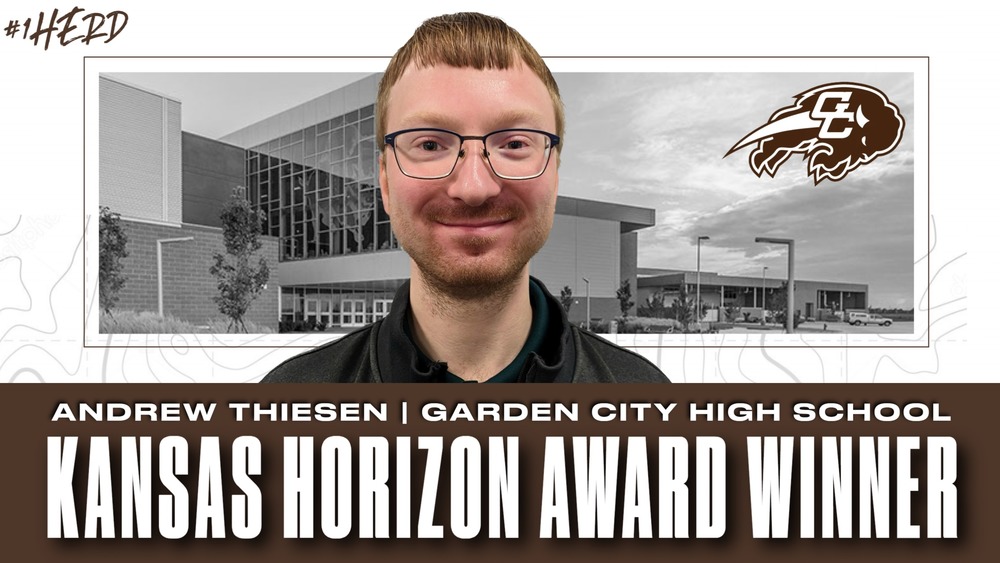 On January 3 of this year, Andrew Thiesen was scheduled for a meeting with some Garden City High School administrators to discuss music education.

After all, that would be the norm since Thiesen is the Assistant Director of Bands at GCHS and just in his second year.

But Thiesen became a little suspicious about the purpose of that meeting when some of his students appeared just before the start. And then when Dr. Randy Watson, Kansas Commission of Education, checked in with a telephone call to the conference room, he knew something was amiss.

That’s when he first learned of his selection as one of 32 educators across Kansas to be named 2023 Kansas Horizon Award recipients.

“I was surprised but pretty pleased,” Thiesen said recently of his selection for the award. “It feels good to be recognized and is validation of the things I’ve learned from my mentors.”

Early in the 2022 fall semester Thiesen’s supervisor, Director of Bands Lyle Sobba and Dr. Virginia Duncan, Associate GCHS Principal, worked with him in compiling his application and the nomination process for the Award.

“I had to prepare several essays and a lot of paper work,” Thiesen said. “Lyle and Dr. Duncan told me that some of the information would cover instructional strategies, I would need letters from a principal and from Lyle. Also, there were supporting letters from band parents and students and it was fairly lengthy.”

The Kansas Horizon Award program, sponsored by KSDE, allows all school districts in the state to nominate one elementary and one secondary teacher for the award. To be eligible for the award, teachers must have successfully completed their first year of teaching and have performed in such a way as to distinguish themselves as outstanding.

The program is a regional competition with four regions corresponding to the state’s U.S. congressional districts. Four elementary and four secondary classroom teachers may be selected for the award from each region. 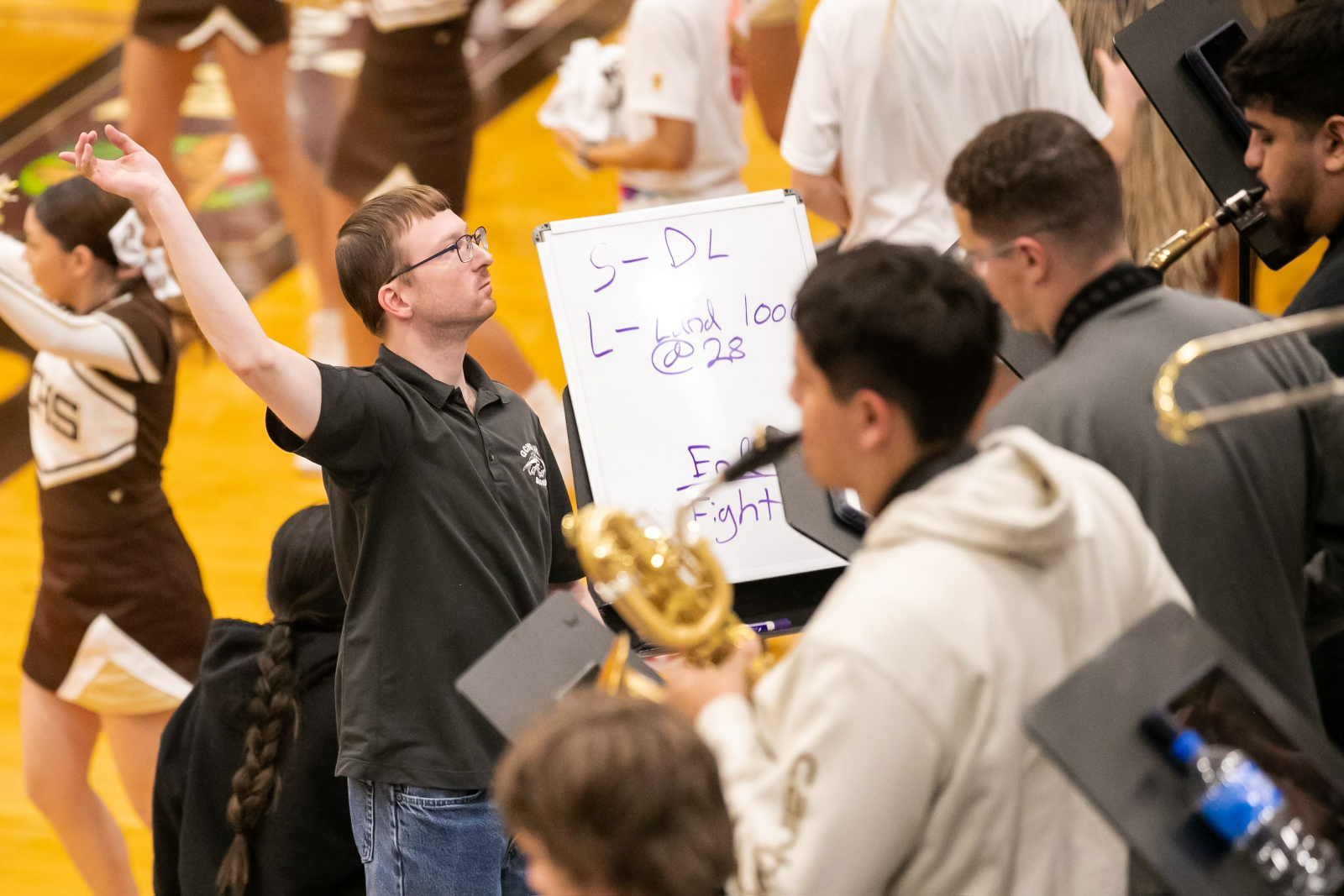 It should come as no surprise to those who are acquainted with Thiesen and his educational background that he might be a consideration for such an award.

He began his love of music in middle schools at Newton and continued through his high school days, playing trombone in the all of his school’s musical groups.

Thiesen continued his pursuit of his music education at Bethel College, located in North Newton. It was there he earned a Bachelor of Arts degree in music, with an emphasis in trombone performance and music education.

When he finished there, he moved on to Wichita State University, earning a Master’s Degree in Music in  Instrumental Conducting with an emphasis in Wind Band Instruction. He served his first year as a Graduate Assistant for Trombone and then in his second year, served as a Graduate Teaching Assistant for Band.

“I think I’ve always just felt a great affection and love of music and the different kinds of music that one can learn to play and appreciate,” Thiesen said. “I hope to convey to my students the same ideas that I learned from my teachers and professors so that they have the same opportunities I had.”

Before moving to Garden City, Thiesen completed his WSU work as the Graduate Trombone and then as a Graduate Teaching Assistant for Band. This included handling administrative duties for the symphonic band. He worked with ensembles as a conductor and in the spring of 2020 completed his instruction there while directing the WSU Pep Band at Shocker basketball games.

He arrived in Garden City for the fall 2021-spring 2022 school year, being hired as the Assistant Band Director. In the fall semester, he assisted with the GCHS Marching Band. Jazz 2 and 3 were his primary ensembles during the fall. At the outset of the 2022-23 school year, he added in the Eighth Grade Jazz Band and Seventh Grade Band at Horace Good Middle School.

In the spring semester, his primary responsibility is directing the Symphonic Band while also assisting with the Wind Ensemble. He and Sobba co-teach the Concert Band.

“I want to teach the students to have the same opportunities that I had,” Thiesen said when explaining some of his philosophy. That’s the big driving force for me.”

While Thiesen’s expertise is with the trombone, he has trained to play nearly every instrument.

“I can honestly say that I can play all the instruments but not well,” he said with a big smile. “Learning techniques is difficult and being good with them requires a lot of time, effort and desire.”

Thiesen said the trombone requires specific training, using the slide in so many different positions to create different notes and sounds.

“It’s all about muscle memory and having a good ear to hear the sound of the notes,” Thiesen said. “With a trombone, there are seven positions and not every note is in a true position.”

Thiesen admits that there is still much to learn as far as being a good teacher, but feels like he has gotten a great start with the people he works with and for.

“No first year teacher is perfect,” he said. “There’s always things to improve on and I just want to be the best teacher I can. It’s important to have the dedication to be the best you can and to recognize what feedback you can get to improve.”

“I have high expectations for them,” Thiesen said. “It doesn’t make sense to do this if you just want to be average. Developing relationships and showing them that you care about them as individuals and not just as a music student is very important.”

As recipients of the Kansas Horizon Award, these educators are invited to join KEEN, a network of educators from around the state who have been formally recognized for exemplary performance. Members of KEEN have an opportunity to network with other outstanding educators and participate in several professional development programs throughout the year.

The educators will be honored at a special ceremony during the Kansas Exemplary Educators Network (KEEN) State Education Conference on Feb. 17 in Topeka.

The 2023 Kansas Horizon Award recipients, along with their regions, are listed below: